The Information Management Resource Kit (IMARK) has been developed by the Food and Agriculture Organization (FAO) of the United Nations in partnership with other agencies and institutions with the common goal of strengthening information management and exchange in agencies, institutions and networks world-wide, allowing them to work together more effectively.

IMARK comprises of a series of e-learning modules and the 6th one being “Web 2.0 and Social Media for Development”. This course provides an overview of the basic concepts behind Web 2.0, social media, user generated content and social networking.


The total curriculum consists of 11 lessons, grouped into two units:


(i) SOCIAL MEDIA FOR DEVELOPMENT

Each lesson achieves a specific set of learning objectives, using interactive step-by-step instructions and exercises which help reinforce what is being taught.

The course curriculum was designed and developed by experts and institutions from an internationally widespread community. The main contributors and authors are from the following Organizations:

Read more »
Posted by ChandasaKoyelas at 05:46 No comments:

This post shares my personal experience as a participant of the Web 2,0 Learning Opportunity organised by the CTA.  You are most welcome to give your views and comments!

A surprisingly nice atmosphere for learning 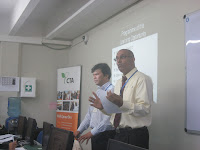 Trainers did their best to organise great sessions of tutorials for different themes on Web 2.0 selected by the CTA.  They really created a cosy atmosphere at the computer lab of the Faculty of Agriculture for participants to feel at ease and to grasp the beauty of the different Web 2.0 tools and techniques. With their ice-breaking session at start and their energizing sessions in between, the atmosphere remained really lively, funny and interesting!

The majority 25 participants present at the training workshop on Web 2.0 come from different agricultural institutions, including the Rodrigues Commission for Agriculture.  A few also included stakeholders from the private sector, the media and even graduate students.

The participants were told that the selection criteria had been made by the CTA as their applications were screened amongst many others and they should feel privileged that they were among the 25 selected candidates.  This really encouraged us and boosted up our confidence.

Read more »
Posted by ChandasaKoyelas at 05:26 No comments: 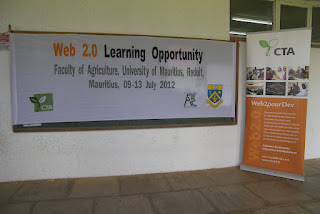 The Faculty of Agriculture, University of Mauritius (UoM), in collaboration with theTechnical Centre for Agricultural and Rural Cooperation (CTA) and the Food and Agricultural Research Council (FARC) is currently hosting a 5-day Web 2.0 Learning Opportunity. This training course has been scheduled from Monday 09 July to Friday 13 July 2012.

During this training, the participants are being introduced and exposed to selected Web 2.0 applications and are getting  hands on practice on the use of the tools.

Programme of the Web 2.0 Training Course

The above web 2.0 training workshop is taking place at the Faculty of Agriculture, University of Mauritius, Reduit, Republic of Mauritius. 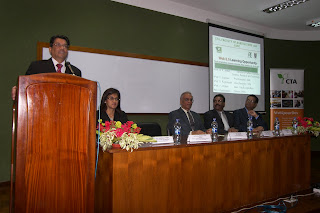 The CTA learning opportunity on Web 2.0 was officially launched by Dr. the Hon. Rajeshwar Jeetah, Minister of Tertiary Education, Science, Research and Technology on 9th July 2012 at the R.Burrenchobay Lecture Theatre, University of Mauritius, Reduit.

The guests who intervened at the launching ceremony were as follows:

Deans of other Faculties of the University of Mauritius, academic staffs of the Faculty of agriculture, Directors and staff of Agricultural organizations, NGOs, stakeholders from the private sector and students were present during the ceremony.

Posted by ChandasaKoyelas at 22:53 No comments:

Introduction to and Definition of Indian Classical dance 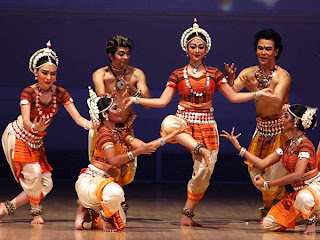 is a relatively new umbrella term for various codified art forms rooted in Natya, the sacred Hindu musical theatre styles, whose theory can be traced back to the Natya Shastra of Bharata Muni (400 BC).

The term "classical" (Sanskr. "Shastriya") was introduced by Sangeet Natak Akademi to denote the Natya Shastra-based performing art styles. A very important feature of Indian classical dances is the use of the mudra or hand gestures by the artists as a short-hand sign language to narrate a story and to demonstrate certain concepts such as objects, weather, nature and emotion. Many classical dances include facial expressions as an integral part of the dance form.
These are:
For lack of any better equivalents in the European culture, the British colonial authorities called any performing art forms found in India as "Indian dance". Even though the art of Natya includes nritta, or dance proper, Natya has never been limited to dancing and includes singing, abhinaya (mime acting). These features are common to all the Indian classical styles. In the margi form Nritta is composed of karanas, while the desi nritta consists mainly of adavus. 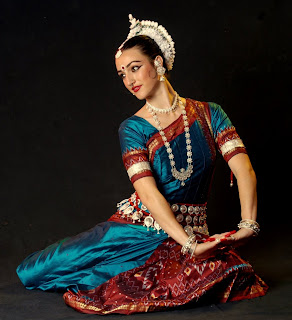 
According to Abhinayadarpanam, one of the two most authoritative texts on Classical Indian dance, a patra must be young,slender,beautiful,large-eyed,with well-rounded breasts,self-confident,witty,pleasing,capable of keeping time (following the rhythm)splendidly dressed of a happy disposition.